Overall, this has been another extraordinary year for the English department at Whitbread. Not only have we been privileged to see many students exceed expectations to achieve exceptional results, but we survived the most challenging year in teaching without Miss Smith head-butting anyone or Mr Morris losing any of his three remaining hairs.

If I try to define my short career in a single word for each year, it would be the following: 1st year was sleepless, 2nd year was delightful (mainly due daddyhood and 11Q/BM), and this year would be the return of ‘Crychan’. Crychan’s Challenge was the most bone-chilling, vomit-inducing, five day military thrashing in the darkest valleys of Brecon. However, at times it was so ruddy fun I was beaming from mud-caked ear to ear.

This year, battling against governmental change after governmental change meant that we were fighting fires left, right and centre. Teachers, students and parents were confuddled beyond belief. Furthermore, Ofsted decided to hit us right in the goolies towards the final weeks of Summer Term, leaving us all exhausted yet elated. This year, I earned my honorary elbow patches and became a proper teacher.

Despite all the kerfuffle, there were so many highlights. We have Year 9 students already expressing interests to read English at Oxbridge, and others who have never read for pleasure requesting recommendations. In Year 10, I believe we have our strongest cohort of young stars yet, with over 45% making four levels of progress and above. Exciting times indeed next year.

Due to our decision to enter the majority of Year 11 students early, we can already celebrate the accomplishments of many, many students. Especially Alexa Greer, who achieved full marks in her exam, full marks in her speaking and listening coursework, and was two marks shy of the whole shebang on her controlled assessment portfolio (just disgraceful). Danny Hanlon, Amy Chiswell, Jan Laming, Andrew Smith and Jonathan Hare also worked tirelessly to achieve the coveted A* grade. Furthermore, Luke Pease, who I believed must have slept though his KS2 SATS, was one mark away from achieving an A* and thus making six levels of progress; testament to his character, he of course re-sat the exam in June. George Longhurst and Jordan Drakes overcame great challenges and are two of the hardest working students I have met. And Laura Potts attended every single extra-curricular revision session in the hope of achieving the highest possible grade (she also happens to be the only student to buy me a beautiful plant as a leaving present, and I didn’t even teach her).

Our Y13 cohort was truly remarkable and each student will be sorely missed by their teachers. For two years we were impressed with your dedication to reading difficult texts, your ability to write critical and innovative arguments, and most importantly, you produced some of the finest baked delights for Cake Friday this school has ever seen. Our star students included Millie Morris, who excelled in both Language and Literature and will one day write a Booker Prize winning novel (and most hurtfully not include me in the dedication); Fiyal Malik, Ellie Corcoran, Hannah Marshall and Becky Reed for the most aesthetically pleasing notes, highlighted annotations and analytic essays; Beth Summerfield, with her wonderful combination of supreme intellect and illegible handwriting will one day be a GP; and finally Alex ‘Spoons’ GERT Ooms, who paraded himself to be as mathematically gifted as Alan Turing, but deep down was the greatest lover of all things literary and lexically pleasing. I hear he has rejected his offer from Exeter to read quasi-formulaic maths in favour of a creative writing course and a career as a beat poet.

And then there’s our bunch of pedagogical primates who have just gone from strength to strength. It has been a tough year for the department, with many feeling the pressure of striving for perfection. Yet most importantly, in addition to delivering extraordinary lessons to their pupils, the English department has grown into a more cohesive and collaborative family (Mr F is definitely the baby of the group). Highlights this year for the staff include: Mr Hetherington retaining the prestigious award for ‘Best Dressed Male Teacher’ despite worthy competition from ‘Bow Tie Friday’ and that dashing fellow from DT; Mr Constant has taken to skate-boarding and gives Tony Hawk a run for his money; Mrs Hopkins finished her magical garden containing fairies and elves; Mrs Baki remains as northern as ever; Miss Marvel has even more shoes than last year; Mrs Kerridge has become a Cambridge lady and is set to take over the world of educational research; Miss Croft became the Head of Drama and is looking forward to directing every James Joyce epic; Mrs Earp will be the Principal of Henlow Middle School next year, and will no doubt be teaching her favourite novel To Kill a Mockingbird to Year 5 pupils; Mr Forthergill got engaged (and no, she’s not a hobbit); and Miss Smith has lasted another year without shanking Mr Morris.

And finally, there’s Mr Price, who is leaving the department to become an Assistant Principal at a school in Milton Keynes. I don’t care much for the word ‘outstanding’ due to its bastardisation by the Dementor fellows from Ofsted, but Mr Price epitomises it in every essence of his character. Not only have his students consistently made exceptional progress, but have been truly inspired in his lessons. He has the remarkable capability to make the boring and monotonous exciting and inventive; he can take the most disheartened and disillusioned student and through the magic of creativity and drama, convert them into a passionate pupil who enjoys English. I have been in the privileged position of observing his teaching many times and have always left learning something new and feeling envious of the fact he didn’t teach me at school (despite the fact he is definitely old enough to have done so). Furthermore, he has always provided sage advice whenever it was sought, and mentored me to become the teacher I am today. But most importantly, he has been the greatest of friends. Mr Price will be dearly missed by all at SWA. The young pup taking over as Head of English has some exceptionally large shoes to fill.

And so, I hope that you have enjoyed your year as an English student at SWA and wish you a very happy and relaxing summer holiday. I hope that you continue to develop a life-long love of learning and literature in 2014-15! 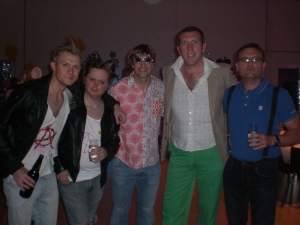